Semeliškės St. Laurynas Church is a monument of wooden architecture, protected as a part of Semeliškės urban complex.
The church and its history have been described in the following publications: B. Kviklis "Lithuanian Churches", Rolandas Gustaitis "Kaišiadorys Diocesan Churches", "Lithuanian Catholic Churches", "Lithuanian Churches: Illustrated Handbook", "Elektrėnai Deanery Sacral Heritage", Semeliškės and the church are mentioned "In the History of Lithuanian Architecture".
About Semeliškės St. Laurynas Church and Parish in the 16th – 20th centuries. 2006 The bachelor's thesis “Semeliškės St. Laurynas Church and Parish in the 16th-20th Centuries. "
Information about the church organ can be found in Girėnas Povilionis 'publication The Art of Organ Work in Lithuania: From Baroque to Classicism, as well as in Rimantas Gučas' book Lithuanian Organs. The old bell of Laurynas church is Gintautas Žalėnas' bells of Kaišiadorys diocese.
Semeliškės St. Laurynas Church is more than 500 years old. 1501 or 1502 After Alexander provided the foundation, a wooden church was built in Semeliškės. It was built away from the village, because the manor homestead was located in the highest place. The church burned down several times and was rebuilt. It has survived to the present day from 1783 to 1786. a wooden church was built. Valuable paintings in the church (including the 19th century “Revelation of the Blessed Virgin Mary”, “Holy Rock”), a wooden sculpture “Jesus Christ”, an ornate cross in the towers (19th century), an organ prospect, fittings, an altar, two brass bells. The bell hanging in the belfry of the church is the second oldest bell in Lithuania - it was minted in 1442.
Onutė Žilionienė, a librarian at the Beižionys Library, wrote the story of her mother-in-law Elena Venskutonytė-Žilionienė (1912–1993), heard from her parents, that after the burning of the Barboriškės church from there, St. The rock painting was brought to the high altar of Semeliškės church. The lady who lived in Barboriškės wanted to rebuild the church, so the painting sometimes returned to that place. In Barboriškės, the painting was kept by soldiers, but that did not change anything - he was traveling from one place to another. He wore the painting for almost a year before deciding to leave it in Semeliškės. 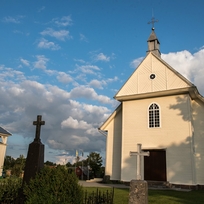