The church in Semeliškės was built in 1895. Since 1896 until 1954 belonged to Semeliškės St. To the parish of Nicholas the Wonderworker. 1937 its parish had 620 believers, owned 31.5 tithes and 11 lakes. there were 406 believers in the parish. The parish authorities registered the parish in 1947, but nationalized several buildings. 1949, 1957 and 1978. the church was repaired. It currently belongs to the parish of Vievis Church.

History of church construction
1868 Residents of Semeliškės town asked the diocese to build a church in their town - after all, the nearest Orthodox church is in Vievis, 19 blocks from the town. In the days before there were good roads and modern vehicles, it was a great distance. The Metropolitan of Vilnius and Lithuania, Josif Semaška, immediately responded to this request. He suggested to the Governor-General of Vilnius, Alexander Lvovic Potapov, that the Catholic community of Semeliškės be connected to the adjacent Catholic parish of Kietaviškės, and that the church be given to the Orthodox Church and the Catholic houses of worship be reconstructed.
Vilnius Governor General AL Potapov examined the situation in detail and decided to leave the church to the Catholics, and recommended to the Orthodox to look for opportunities to build a church in Semeliškės according to the original project. It is true that different sources give different reasons for such a decision. There is only one clear thing that the Catholic parish was very large and abundant (according to historians R. Laukaitytė and G. Šlevis, it consisted of 5,624 people), and the emerging Orthodox population was considerably smaller - about ten times. The time to build a church in Semeliškės came in the 19th century. in the early 1980s. 1893 The Orthodox Board of the Vilnius Diocese sent a project of a typical brick building with 200 seats and approved the construction estimate. In that year, the construction of a church was started in Semeliškės manor, and in 1895. next to it was allowed to build a priest's house. As noted in the book of Germans Šlevis, most of the funds needed for the construction were provided by the treasury, the money was donated by the county governor Aleksejus Nikolajevičius Peikeris, and donated by local Orthodox peasants. The stone church building, connected to the belfry, was erected in the central square of Semeliškės town. As described by the habilitated Doctor of Architectural Sciences, Professor Algirdas Miškinis, who has published hundreds of scientific articles and studies on the architectural peculiarities, historical and urban development of cities and towns, Semeliškės St. The building of the Church of St. Nicholas the Wonderwork is a structure typical of this type of building, it consists of three parts: the hall, the connection and the belfry. St. The Church of St. Nicholas the Wonderworker became the only brighter accent of the settlement, because the distant St. Laurynas Church has no greater significance for the image of Semeliškės. 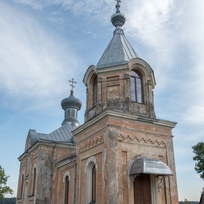